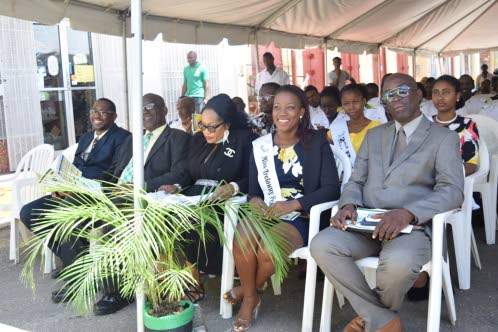 Prime Minister Andrew Holness's recent reassurance of his Administration's commitment to protecting the environment has gone down well with Mayor of Falmouth Councillor C Junior Gager.

“The Government remains committed to protecting our environment, and will only pursue projects that are environmentally sustainable.

Gager, who is also chairman of the Trelawny Municipal Corporation (TMC), expressed his appreciation for the recent assurance from the prime minister.

“We are encouraged again to hear that the prime minister is sensitive to the concerns of the people.”

Addressing the Independence Day Civic Ceremony, put on by the Jamaica Cultural Development Commission and TMC in the historic Water Square, Falmouth, Trelawny on Tuesday, Gager said a team from the TMC, along with Member of Parliament for Trelawny Southern, Merissa Dalrymple-Philbert recently sat down with members of the Southern Trelawny Environmental Agency and residents of the Cockpit Country to discuss their concerns.

Gager, who is a farmer and the councillor for the Warsop Division, said that following a meeting with Dalrymple-Philbert and Holness, the prime minister committed to review the mining in the area. He said the TMC has also met with Minister of Transport and Mining Robert Montague about the troubling mining issue in the Cockpit Country.

“MP Dalrymple-Philbert has told us that there is no reason to doubt that our prime minister shares all our concerns and is still committed to protecting the Cockpit Country. As with all leaders, he intends to review the entire situation and has promised to meet with the people of the Cockpit Country sometime in late September or early October,” Gager said.

The Cockpit Country, which is sometimes reported to cover six parishes: St James, Trelawny, St Ann, St Elizabeth, Manchester, and the northern tip of Clarendon, supplies critical fresh water for Jamaica, estimated at 40 per cent of the water needs of six western parishes, and 40 per cent of all Jamaica's underground water resources. This clean water is generated and accumulated by the forests of Cockpit Country.

Apart from its biodiversity-rich qualities, Gager also pointed to the historical significance of the Cockpit Country, where the Maroons persistently fought the British and were consequently offered to sign a peace treaty. The first Maroon treaty was signed by the fierce Leeward Maroon leader, Cudjoe on March 1, 1739.

“The Cockpit Country is a vibrant, cultural, historical, and symbolic site. This is where the Maroons fought the British to a treaty in 1738/1739. The Cockpit Country remains a symbol of resistance and triumph for all Jamaicans. The Leeward Maroons still live in the Cockpit Country and their culture is an essential aspect of Jamaican heritage,” Gager remarked.